To St. James's Club By Bus 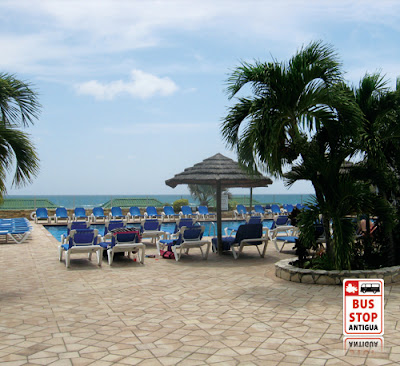 A couple weeks ago, my sister, my mom and I played hookie from day to day living and went on a day pass at St. James's Club. It was only this year that I discovered the lovely experience called the day pass. For a fraction of the regular price of a room and for about $100 EC each, we got to take advantage of all the resort had to offer and a very nice room. The only concern we had was how to get there.

As you can see from the google map below, St. James is nowhere near a bus stop. The closest bus stop is in Cobbs Cross.


View St. James By Bus in a larger map

We knew that when we hopped on a #17 bus, Bus #87 and we figured that we would find our way to St. James's somehow. The bus didn't have much people and the atmosphere was light and jovial. We travelled through All Saints, Liberta and Falmouth.

As we approached the Cobbs Cross bus stop, we called out the stop and prepared ourselves to work out how we were going to make it to the resort. As I paid the fare, I asked the bus driver if he knew how to get to St. James's from Cobbs Cross. He told us he could take us, if we paid a little extra. He went on to tell us to name the price and in the end we paid him $27 EC for the entire ride from the center of the island to St. James for 3 people. Sounded good to us. 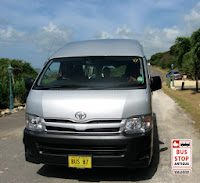 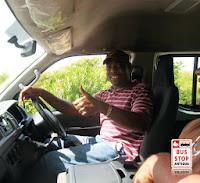 ..most bus drivers are willing to take passengers wherever they want for a little more money.


On the drive to the resort, the bus driver informed us that most bus drivers are willing to take passengers wherever they want for a little more money. If you ask nicely they will do you the favour. This is not the first time I've heard this, in fact one bus driver told me that some buses would act as taxis if the price is right.

Because they were not expecting us in a bus, we had to enter St. James at the gate. The only problem with this is we had to walk the full length of the property to reach the reception desk. Trust me this was not the Front Desk.

After checking in, we had breakfast. In my case, a huge breakfast - pancake, sausages, an omellette with almost everything in it, fruits. Yum. This was followed with going to the room and letting the sleepiness of eating to much run it's course.

It wasn't long before I was itching to leave the indoors and have a bit of fun. With sister in tow, I went to the bar by the pool. We ordered the drink of the day, Blue Horizon, which was mixed to perfection. And although we ate, we still got a bit tipsy so we took a walk around the property to sober up.

On our walk, we were offered a few pieces of coconut from a little blonde boy with blue eyes. We walked along the coast and found what I believe is Antigua's smallest beach. We found ourselves at watersports, so we decided to go out on the paddleboat. Let's just say we are not in shape and we found ourselves taking breaks every few minutes. All in all good fun, we even took pictures of the resort from the water. 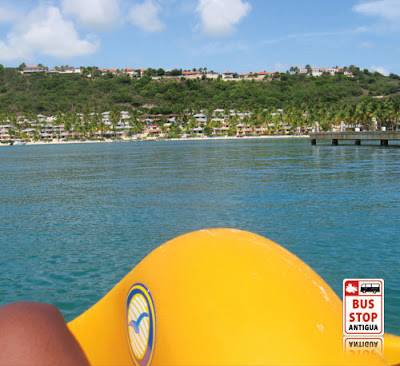 Back on land, we sought out the bar and got a couple of beers. We then went and played pool, which was a smart move because it was hot, even the sand under our feet was hot. Not only did we play pool, we played our version of ping pong which meant we spent more time running after the ball than hitting it.

Having had our fun out of the water, we decided it was time to get wet. We went back to the room and threw on our swim suits. We continued to explore the property by going in the other direction. We found a small pool near to a restaurant and we set up camp.

It was an hour or so later that we started to get hungry. We gathered up our things and went to the restaurant. We ordered a late, boozy lunch and ate while being entertained by the staff bantering with each other. 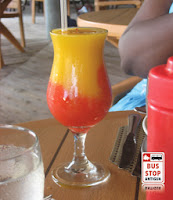 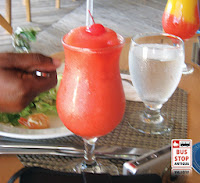 By the time we were finished, we were relaxed by being in the water and having a big lunch. We made our way to the room, taking a different route from the one we took before. When we got to the room, we crashed in the bed. The unfortunate thing was I was too tired to sleep.

In the end, we watched a crazy zombie movie which ended just when we were to check out. We gathered up our things and made our way to reception. The only concern: How are we going to get off the property?

Luck would have it that my sister someone she knew who was leaving at that moment. She asked her if she could give us a ride to the bus stop and she said sure. In fact she gave us a ride to Liberta.

We did have to wait a while before a bus arrived, but we were just happy that we were somewhere where we could get a bus. In less than 10 minutes, we were in walking distance to home.

Although I had heard of day passes, I never thought to go on one. A few of the bigger hotels have them, St. James's, Verandah, Sandals. To find out, ask someone who works at a major hotel or call the hotel and ask. Not only are they great for locals, visitors can take advantage of them. You can stay at one property and go on a day pass at another.

To see more pics of our adventure at St. James's visit the Facebook page and the St. James's album.

When I started Bus Stop Antigua, the purpose was to provide information that I found was lacking. What I was surprised to receive was emails from users of the site asking for specific information. It was to the degree that I was getting emails almost every month.

The thing is I've worked in retail for over 15 years so it is natural for me to ensure I meet my customers' needs. When I get a question, I try to answer it to the best of my ability. I even got in contact with the Antigua & Barbuda Transport Board to answer an email.

As this is the case, I answered an email from Natalie, doing my best to answer fully. As usual, I do it and move on to the next thing. Then a few days later my sister tells me there is a mention of Bus Stop Antigua on the FaceBook page, Customer Service in Antigua & Barbuda. She and another person sent me a FB message mentioning the mention. 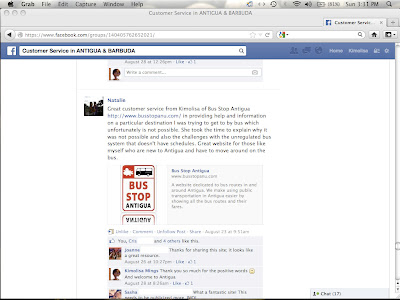 To say I was pleasantly surprised is an understatement. I thanked Natalie on the post, not only was I not expecting it but it brought attention to the website. I always believed in word of mouth, it may be slow but it is effective.

I just wanted to share even though I think I'm rambling. Hee hee.

source
Ever wonder what it would be like if Jamaican buses were set up like airlines, with the flight attendant and captain giving safety instructions?
Bus driver speaking on the intercom:  Welcome to Bus numba 40 running from Papine to Down Town Kingston.  Please direct yuh attention to di ConDucta who will instruc' yuh on our safety and model features.
ConDucta:  Hail up massive!  We want yuh fi know dat yuh a ride pon di safes' bus dat run pon di Papine to Downtown route.  The moggle of our bus is a 1980 Encava, own and operate by Rough Rider transports.  Dis moggle can survive any adversities an' cantravasies.  As unnu can si dis bus get nuff lick up an' bad man shot it up nuff time  an' it still a drive like new!

This bus seat up to 55 passenger, howeva, due to fi we commitment to excellent service, we no leave anybady straddling ina di streets.  So expect to 'ave up to 140 people in yah by di time we reach downtown.

Durin' di journey we may encounta unexpected turbulences.......... dese are known as pot holes. In di case of a sudden bump please refrain fram bawlin' out "Lard Jesus mi dead now!"  Our driva is an experience driva an' will mek sure di axle an' wheel noh bruck aff ina one a dem.  But in case we drap inna one an ca'an come out.

Dis is NOT a non-stop journey.  As a matta a fact wi stop any which part wi waan fi stop, at every yaad gate - all ina miggle road wi stop.  Howeva dis bus noh stop fi police  ... in case of an unexpected police  chase, the driva will be forced to increase de bus' normal speed from 100 mph to 160 mph.  Yuh will be instructed to hole on tight an shet unnu mout.

Toughest Place to be a Bus Driver 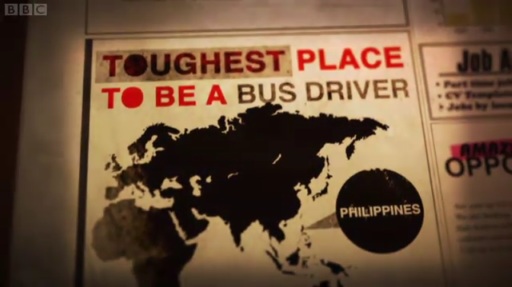 This morning, just before leaving the house, I saw the commercial for a show that caught my interest. It was called "Toughest Place to be a Bus Driver". As I left the house I decided I had to see what this was all about. I hoped on my trusty internet and looked it up.

"Toughest Place to be a Bus Driver" is one of three documentaries that aired on BBC Two in the United Kingdom in February 2011. The other two were centered around a Paramedic and a Midwife. The shows were such a success that they came back in early and mid 2012 and mid and early 2013.

The first "Toughest Place to be a Bus Driver" had London bus driver, Josh West , traveling to Manilla in the Philippines to take up his new job as a Jeepney driver on some of the most congested streets in the world.

If you think driving in Antigua is hair raising, check out the documentary below. 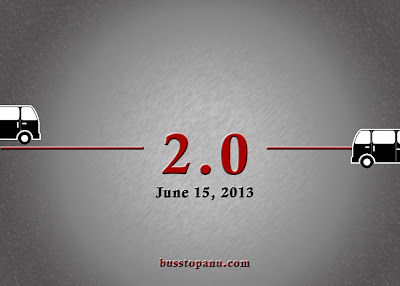 After four months since its launch, Bus Stop Antigua will be meeting one of its major milestones of providing detailed bus information. As of June 15th, 2013, visitors to the site will be able to choose both their point of origin and their final destination. Upon submitting their start and end villages, town and/or residential areas, a table will be generated showing 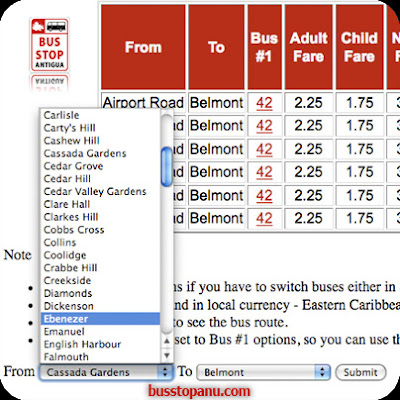 It is the aim of Bus Stop Antigua to become Antigua's #1 website for local public transportation. In the months to come Bus Stop Antigua will be introducing new features which will make bus travel in Antigua easy and simple. 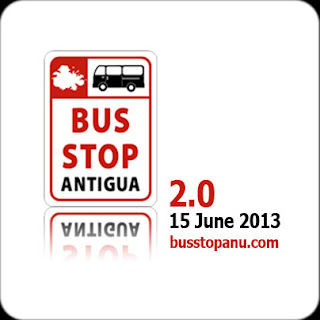 So jump on a bus and enjoy the ride with Bus Stop Antigua.

Email ThisBlogThis!Share to TwitterShare to FacebookShare to Pinterest
Older Posts Home
Subscribe to: Posts (Atom)
Bus Stop Antigua is your one stop for information on how to travel around Antigua using buses